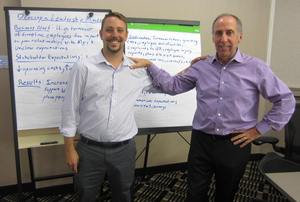 A full year has passed since Jared Allen won the 2013 Don Kirkpatrick Scholarship awarded by Kirkpatrick Partners and the ATD Valley of the Sun Chapter.

We have followed up with Jared throughout the year to hear about how he has implemented his learning at his organization, Goodwill of Central Arizona. Read on for a final wrap-up of the improvements that his organization has made in this short amount of time, and get ideas that you can apply immediately, too.

The principles and processes of the Kirkpatrick Model have influenced several areas of Goodwill of Central Arizona, producing solid results and metrics to prove that training is effective.

Several metrics have come from a newly implemented training store that was established to hone the behaviors of managers that have recently been through training. All employees of this store are managers in training that receive constant feedback and support. Although this store was originally slated to be closed due to low foot traffic and a dated appearance, since its re-introduction as a training site, it has achieved a positive budget and exceeded goals in areas such as customer count and projected revenue.

This dedicated training store is the ultimate example of creating a welcoming on-the-job environment where learners can practice what they’ve learned and receive support without experiencing the red pants phenomenon.

Even if you don’t have the opportunity to establish the same type of application environment as Goodwill, don’t forget that there are plenty of things you can do to support on-the-job implementation, even before the training program begins.

Click here to meet the winner of the 2014 Don Kirkpatrick Scholarship.Join the Discussion

We welcome your feedback about this quick tip. Here are some ways to join the conversation:

Register with us to receive Kirkpatrick Quick Tips delivered to your inbox each Wednesday.

Level 3 in Action: Update from the Don Kirkpatrick Scholarship Winner

Tips You Can Use from a Kirkpatrick Bright Light

Four Ideas You Can Use from Bright Light Jared Allen