Your 2016 Moment of Truth Is Coming 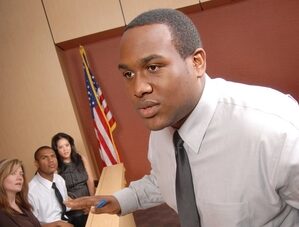 When my previous boss unsympathetically demanded answers from a roomful of intimidated company leaders, only one person had the courage to speak up.

Read on for the full story, and start considering how you would like to respond when confronted with your moment of truth.

I remember it like it happened yesterday. I was working as the Director of Training for First Indiana Bank in Indianapolis. It was nearing the end of October in 2006. Our CEO, Bud Melton, called a meeting in the boardroom for all the leaders of the bank who, in some form or other, were involved with managing projects. It is important to note that Bud is a huge and rather intimidating man, one not sympathetic to excuses or poor performance. There were probably 30 of us in the room, all apprehensive of what was to happen.

Bud started off the meeting, “Yesterday, I asked each of my senior managers how many projects they have asked their reports to complete this year. The total number is 122. It is nearing the end of October and, by our count, 41 are completed. My math says 81 are unfinished or not yet started.”

He glared around the room as he spoke. Most of us were looking at our shoes. Silence.

“What are the chances that all of these projects will be completed by the end of the year?”

More silence and shoe watching. It became evident that he was going to wait us out. Finally, a timid, quaking voice coming from the outer edges of the huge conference room table spoke, “There is not a snowball’s chance in hell of that happening.” The words had come from John Miller, a junior secondary marketing manager.

Dead silence. Finally, Bud took a deep breath, very deliberately slammed his big fist down on the table and boomed, “It’s about time somebody around here had the courage to tell me the truth!!”

What is a moment of truth? It is when a situation presents itself that stirs your very core, begging for you to take a stand. That was John’s moment of truth. Somewhere in his inner world, he made the decision to go against the crowd and the norms of the bank, and to be truthful to a man who could have squashed him like a bug.

In all probability, you had at least one moment of truth in 2015. It may not have been as obvious as John’s (and the rest of us who chose not to speak), but if you think back, you will remember it. Perhaps it was when you saw someone demeaning someone else of lesser status, when you were asked by a co-worker to do something somewhat on the wrong side of ethics, or when an opportunity appeared out of nowhere. The common thread is that it beckons a courageous response. Perhaps you took the high road and responded as John did. Perhaps you didn’t.

We live in a society in which risks generally are not rewarded. There is pressure to speak without saying anything that may be called out. Many are turning into walking avatars that think and act as if they were programmed.

I, for one, commit to at least considering the high road whenever I am aware of my moments. Your moment of truth is coming in 2016. Probably several of them. I believe that the key is to consider the moment and the risk/benefit of choosing a certain course of action. But know that the choice of defaulting to doing or saying nothing is a choice. Sure, if you choose truth, you may get criticized for being self-promoting. You may look like a fool in someone’s eyes. But, you also may come out on top.

I believe that the most powerful, proactive responses to moments of truth are when your actions benefit others more than yourself. When done in the spirit of boldness for what is right rather than from ego or self-benefit, I like your chances of making 2016 a grand year.

By the way, if you’re wondering what happened after the slamming of the fist and the booming of the voice, Bud immediately asked John to step to the whiteboard to record each project, followed by a productive discussion of prioritizing which could actually get completed by the end of the year.

Are You a Truth Teller or a Pleaser?What Don Kirkpatrick Wanted You to Do – Part 1